What is Fat Adapted? How Do I Get There?

Have you heard the term “fat adapted” and wondered what it was?  It means that your body is burning stored body fat reserves for energy/fuel.   Does it sound too good to be true?  It’s not, it is wonderful!   You will have sustained energy levels without all of the energy crashes!  You will be more alert! You will have less cravings!  Like I previously said, it is wonderful!

However, thanks to the typical Standard American Diet that we tend to eat, our bodies are used to running on a constant supply of carbs.   A few hours after eating, our supply gets low and we can experience low blood sugar.  That can lead to dizziness, brain fog/fuzziness, inability to focus/concentrate.  In other words, a sugar rush, followed by a sugar crash.  What do we do when we experience this crash?  We eat carbs, which sends blood sugar levels through the roof and the cycle continues.

When this happens, your body combats the flood of glucose by sending out more insulin.  The insulin works to get the sugar out of your bloodstream and into your cells.   This then sends out signals that you are hungry, usually for more carbs.  This can lead to weight gain, especially around your midsection.

What if, instead of constantly relying on eating carbs, you could use the excess fat on your body as a steady source of fuel.  You can! That is the wonderful world of fat adaptation!   But, how in the heck do you get there?   You follow a healthy ketogenic eating plan.  To do that you:

By eating low carb, you will burn through the carbs stored in your body quickly, so that you can tap into your stored fat for energy.  The “good” fat you eat will keep you feeling full and satisfied between meals and you will able to go 4-6 hours between your meals without feeling hungry.   Many can go even longer than that and practice Intermittent Fasting, but we will get into that in a later post!  Those peaks and valleys of energy that used to plague you will be gone, as you use your stored fat for energy.  It’s a beautiful thing!

Posted by Jackie Watson Fitness at 9:03 PM No comments:

5 Benefits of a Keto Diet – Other than Weight Loss

Let’s face it, the number one reason people go on a ketogenic diet is weight loss.  It works.   It puts your body into a fat burning state called ketosis, where you burn fat for fuel.   But, many people are nicely surprised find that they experience OTHER benefits as a result of this way of life.

1. Brain Health (reduction of brain fog)
I can’t say that I suffered from brain fog before I had cancer, but I certainly had it during and after chemo.   Once, I was trying to deliver something to a business in my little town of Canton and I got lost.  I drove around for about 15 minutes and called my husband crying.  I was lost in Canton!  I had a horrible case of chemo brain.  It would come and go and it was very frustrating.  While in ketosis, people (including myself!) report an increase in concentration and mental sharpness.  I know I think more clearly.   It also works as a mood elevator.   A ketogenic diet has been studied extensively in epileptic children.  This is a common neurological problem that causes unpredictable seizures. Studies show that half of all patients will experience at least a 50% reduction in the frequency of their seizures on a ketogenic diet.

2. Helps Prevent and Reverse Type II Diabetes
A keto diet reduces blood glucose levels and subsequent insulin release.  Carbs cause a quick rise and fall in blood glucose.   Refined carbs have an even quicker insulin response.  Frequent blood sugar swings will also spike your hunger hormone, which can leads to overeating.  We tend to crave carbs after we eat carbs.   I know that I certainly crave carbs after I eat a non-ketogenic meal.  It is a vicious cycle!

3.  Increased and Sustained Energy
Do you ever eat a candy bar and get a rush of energy?  How do you feel an hour later?   Sluggish?  I know I do!  Energy that is derived from carbs comes quickly, but it goes quickly, too.  Fat is a much better energy source.  I know that many athletes think that they NEED carbs to be able to perform, but it just isn’t true, once you are fat adapted.  I will write about fat adaptation for my next post!

4.  Reduces Risk Factors for Heart Disease
Cardiovascular disorders (heart attacks, stroke, coronary artery disease) are a leading cause of death.  A ketogenic diet can reduce many of the risk factors for these.  A few of the risk factors are high blood pressure, diabetes, inflammation, high blood cholesterol.  We used to think that a high fat diet increased our risk factors for this disease, but that isn’t the case.   Fat is essential for cardiovascular health.  However, the type of fat is key!  Omega-3 fatty acids and other polyunsaturated fat are very good for you.   However, trans fats raise LDL cholesterol and lower HDL cholesterol and are bad for heart health.

5.  Cancer Prevention and Cancer Fighter
As a breast cancer survivor, this is the #1 reason that I switched to a ketogenic diet.   Will my ketogenic diet CURE cancer?  No, it will not, but it CAN help in the fight!    Being in a state of ketosis starves cancer cells, which thrive on glucose.  Can they survive without glucose?  Yes, but the cancer cells have to work extra hard to spread.  Running your body on ketones, as opposed to glucose, deprives the cancer cells of their preferred choice of fuel.  Also, as stated above, being in a ketogenic state reduces inflammation, which is also linked to cancer.   Like I said, it will not stop my cancer from coming back, but I want to do everything I can, in my power, to discourage it from coming back.  I know that it may.  I also know that there are many risk factors and susceptibilities in our bodies that we can’t change, but my diet is one that I CAN control.    Do I eat a healthy keto diet every single day?  No, I do not.   I am not obsessive about it, but I do TRY to eat keto most days.  Why wouldn’t I?

There, of course, are a lot more in depth reports/studies on these findings, but this is a quick “cliff notes” version.  I continue to read and study this and I find the subject fascinating.   Next up.....fat adaptation! 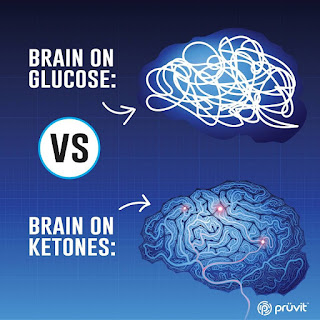 What Is Apple Cider Vinegar and Why Do I Use It?

Apple Cider Vinegar (ACV) is vinegar made from fermented apple juice.  It is 94-95% water and 5-6% acetic acid [2]. It also contains trace amounts of other acids, such as malic acids as well as several minerals. It alone is not a good source of nutrients or fiber.   However, it’s health benefits come from its acids and even phytochemicals and it is used in cooking as well as a home remedy.

I get asked, a lot, if ACV can be used on a Ketogenic Diet.  YES!  It is an extremely low carb condiment and it effects your blood glucose levels in a positive manner.  It can help aid you into getting into ketosis a little quicker and it boosts the effects of a ketogenic lifestyle.  So, what are the benefits of ACV, you ask?  Well, here are 5!

2.  Reduction in Appetite   Since ACV slows down digestion it promotes a more favorable release of blood glucose, which improves overall blood glucose levels, it makes sense that it also helps curb appetite.

3.  Weight Loss   Since it does support glucose regulation and helps curb your appetite somewhat, it can definitely aid in weight loss.

5. To Fight Bacteria.   Because ACV is acidic, it can kill bacteria, fungi, and some studies are indicating, possibly even viruses.  Acids disrupt the membranes of these microorganisms as do highly alkaline compounds. However, researchers believe that this could partially be attributed to the polyphenols in ACV.   ACV was effective against E. coli, S. aureus and Candida.

So, which ACV should you choose?   Raw and unfiltered varieties are cloudier and develop what is known as the “mother,” which is a colony of acetic acid bacteria and yeast. This structure is completely harmless and studies show that the “mother” contains health-benefiting compounds that may further boost vinegar's health effects.  So, look for one that has the “mother” written on the label.  I have been purchasing Bragg’s, which is a very good product and is easily found in most grocery stores.

Here is a picture of mine, I leave it on the counter, so that I don't forget it.   Yes, I drink it in a shot glass that I picked up on a cruise!  Yes, I make a face and a funny noise every time I drink it, but I love it, LOL! 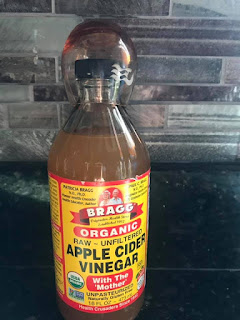 I am happy to report that my scans were clear and that my report from my Oncologist was good!  Praise the Lord for that!  Thank you to everyone who prayed for me, sent me messages and rejoiced with me in the good news!   I have to say, this test cycle went easier for me than in the past.  I had less anxiety this time, especially during the week between scan and results.   I only had a few times that my mind "went there".    I will go back in 3 months for bloodwork and then again in 6 months for scans.  This is my new "normal".   I am fortunate, I had a 100% response to treatment, so I'm not complaining about my "normal".

On a different note, the days are getting longer and I'm really glad about that!  As much as I love seeing the seasons change and seeing the beauty of the snow, I'm ready for some warmer, longer days!   Dan's school district has had 10 snow days this school year!   Crazy!  I remember recent winters where we didn't have hardly any snow.   Our upcoming cruise will be a pleasant diversion and I hope we bring warmer temps back with us!